A fire sprinkler system is an active fire protection measure, consisting of a water supply system, providing adequate pressure and flow rate to a water distribution piping system, onto which fire sprinklers are connected.

Over the years, fire sprinklers have become mandatory safety equipment in most parts of India, in certain occupancies like newly constructed hospitals, schools, hotels and other public buildings, Industries, etc. subject to the local building codes and enforcement.

Sprinklers may be required to be installed to reduce potential property losses or business interruption. Each sprinkler activates independently when the predetermined heat level is reached. Because of this, the number of sprinklers that operate is limited to only those near the fire, thereby maximizing the available water pressure over the point of fire origin.

Fire Sprinkler Systems have been the biggest breakthrough in fire protection in the last 100 years. Fire sprinklers are the most effective method of protecting lives and property. Sprinkler systems are now recognized as being so effective they are being made mandatory in many situations.

Every building should be classified for fire risk under the following categories: light hazard, ordinary hazard group and high hazard group. Factors involved in classifying a building's hazard level include the material used in construction, the occupancy level, the materials stored in the building, the processes performed in the building (and whether these processes include flammable liquids), ceiling heights, ease of egress, and the amount of floors and rooms.

Fire safety standards indicate the colour of the bulb and the respective perating temperature:

Components of the System:

Each sprinkler head contains a glass bulb or a fusible link. The bulb contains a liquid and a quantity of vapour. The liquid expands under the influence of heat as do the fusible link heads. When the temperature reaches a certain level – typically at 68 Degree Centigrade – it will expand the liquid and break the bulb or fusible link, which in turn releases water directly onto the seat of the fire.

The hot gases from a fire will make the sprinkler operate. A fire creates a narrow plume of hot air and gasses that rise to the ceiling and spread out. These hot gasses activate the sprinkler head at the correct temperature.

The installation is the most common type and a typical sprinkler is shown as below. 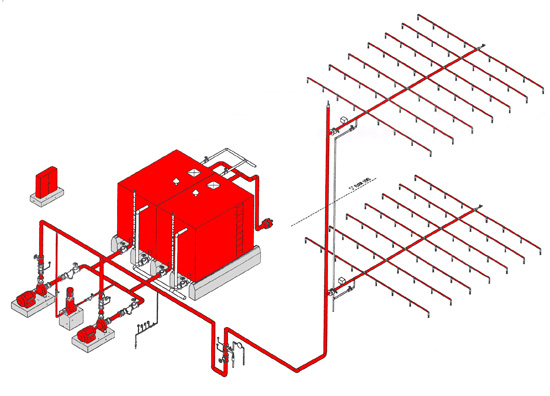